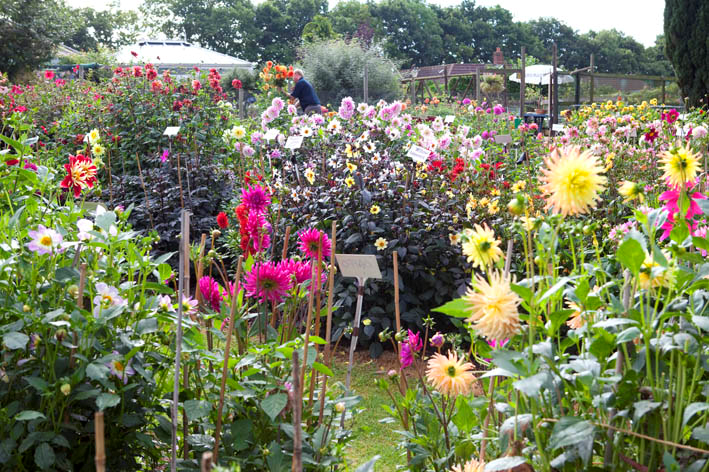 Nick Gilbert’s talk (Tuesday 14th February 2017), beautifully illustrated with colourful pictures throughout, was well attended and much appreciated by our membership. It was especially pleasing to see a mix of old friends, new members and visitors… some from further afield than our 2 villages. 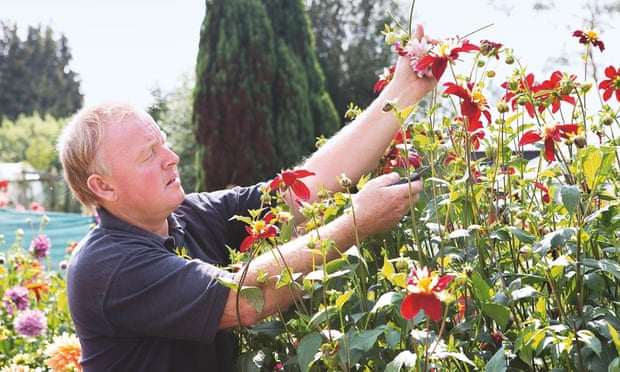 Nick began by explaining that having taken an interest in dahlias as a child he was inspired to grow them in a 2 acre field alongside his nursery at Sherfield English. Originally growing for cut flowers he now opens the field to visitors so that they can both enjoy the display and choose the varieties they might wish to have in their gardens. He has now doubled the acreage with a second field…the first on light soil and the latter on clay. An interesting experiment in itself.

Explaining that dahlias are the National Flower of Mexico, he said they were introduced here by a Swedish botanist, originally as a foodstuff. When some neglected tubers sprouted some beautiful flowers a whole new game ensued!

While a few tolerate partial shade nearly all love full sun. (One or two shade lovers only flower well in shade). The growing season is from April to the first frost. They are heavy feeders, loving well rotted manure/compost and blood, fish and bone in the Spring. Heavy soils need less feeding.

Container grown dahlias do well too, where John Innes is better than potting compost. Cut down the container grown plants after a frost has blackened the leaves, overwinter and keep dry. Water sparingly in April and off they go again. These should grow and flower earlier than those grown in the ground. Apply a fertiliser to give them a boost. Repot very 3 to 4 years, splitting any overlarge tubers. 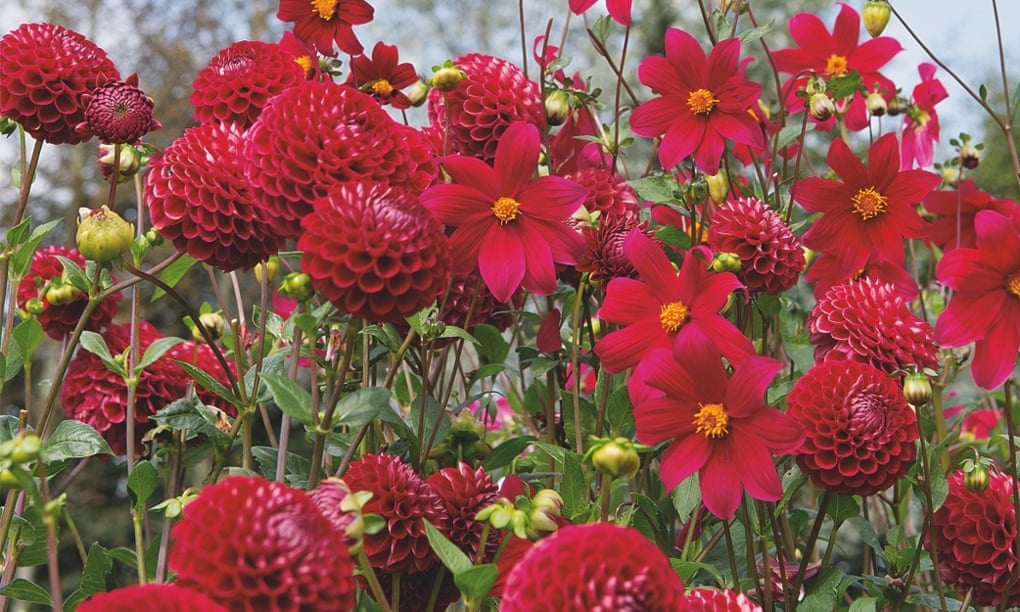 Tubers can last forever! Nick lifts and stores his tubers grown in the heavier clay field, but not those in the lighter soils, which is a good rule of thumb. All soil is washed off and the tubers stored when dry. Dust with fungicide to be safe.New tubers and those coming out of store can be started off in pots in mid to late March. A little bit of shade at this stage actually accelerates flowering!

Those left in the ground should be lifted and divided every 3 to 4 years, timing this as the dahlias start to grow, mid to late March. Don’t be too greedy; splitting in half will do, making sure each has at least a couple of growing tips. This will rejuvenate the flower power.

If you want to increase your stock take fresh cuttings from new growth , potting these up in fresh compost with John Innes, preferably in a propagator, misting lightly and feeding with seaweed liquid feed. Pinch out for compactness, extra flowers and to avoid tall top-heavy plants.

Plant out in the ground at the end of May/early June, to avoid late frosts. 1 metre apart and supported by 3 canes and soft string ( containers too). Pinch out again, if necessary, to get the size and shape of plant you want. Flowering will build up and to a crescendo in September, when much of your garden is past it’s flowering best. Dead-head for repeat flowering right up to the first frosts. Take off any flower when the back petals go over, and right down to a stem junction. This encourages dormant buds and avoids having blackening stems spoiling your show ( and poking you in the eye!).

When the first frosts occur, don’t cut back immediately as the sugars in the stems need to find their way back into the tuber. Cut stems off just below ground level, as hollow stems will act as a funnel for water and rot the tuber. Plant a cane plus a label as a signpost for next Spring. Mound up with compost to reduce the effects of cold and water-logging during winter, and to protect the new growth in the following year.

On heavier soils, again wait 2 weeks after frosting, and lift these. Wash off the soil with a hose-pipe to reduce the chance of rotting. Leave the roots on, but cut back the stems to the tuber. There is no need to store upside down ( sorry, Grandad), or store in compost, but you must keep frost free and dry, avoiding condensation too. Polystyrene boxes are ideal, as is cardboard. Keep an eye open for cutting material early in the year, as they begin to sprout.

For a bit of fun, why not let a few flowers go to seed. Pick the seed heads and allow to dry completely. Sow in Spring and see what new varieties you and the bees have started. They won’t be true to the parent plant but who knows how lovely they might turn out?

As far as pests are concerned, deer tend not to eat them, and although rabbits do munch, the plants should recover. Hopefully the ladybird larvae will see off any earwigs. The latter can also be trapped in upturned flower pots filled with straw or shredded newspaper and squished. Blackfly can be jetted, although they are also a favourite of the ladybirds. Slugs and snails should be attacked with environmentally friendly pellets containing pheremol. Beer traps and midnight vigils also work.

Nick is clearly a great enthusiast for this fantastic genus, growing 400 varieties… in his fields, in pots and for sale as tubers or plants. Have a look at gilbertsnursery@aol.com or visit all year round, especially in Spring or later in the year to tour the growing fields.