This Society was founded in 1923 to combine the gardening interests of people in the adjacent villages. It was founded by the Misses Beatrice and Ada Davies who were employed by the owners of nearby Breamore House to “beautify” their gardens. Their horticultural skills must have been considerable since they remained in the area for the following 10+ years, their likenesses being painted into the murals on the inner walls of Woodgreen Village Hall depicting the Annual Flower, Fruit and Vegetable Show in 1932 or 1933 organised by the Society. 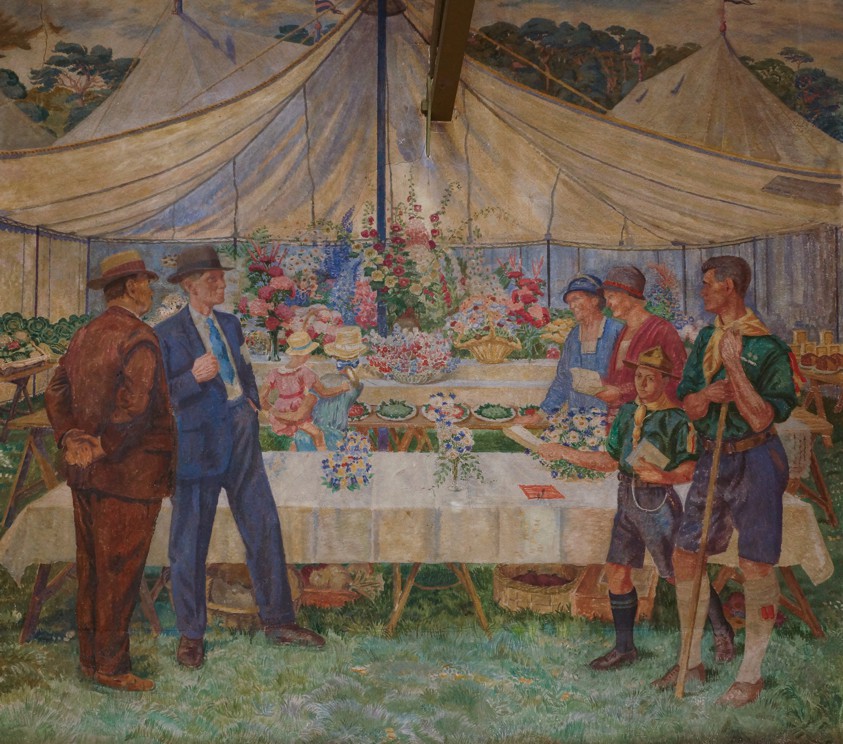 This annual event has continued ever since (with a probable unbroken sequence, although archive confirmation between 1940 and 1945 is missing). Following the Second World War the large membership enjoyed additional activities which expanded slowly to include visits to other gardens in adjacent counties, a Spring Plant Sale, talks and film shows and inter-village gardening quizzes during the dark winter evenings.

In 1958 the Society became affiliated to the Royal Horticultural Society and thereby was able to award the Banksian Medal (named after the founder of the RHS) to the overall winner at the Annual Show.

A major highlight in the history of the Society was the recording of a BBC Gardeners’ Question Time in Woodgreen Village Hall on May 17th 1975 and its subsequent broadcast on June 8th and 10th by Radio 4. The members of the Team were Fred Loads, Bill Sowerbutts and Prof. Alan Gemmell.

The Society organises a number of events for its membership. Visitors are welcome for a nominal charge. Evening talks by invited speakers are held on a range of horticultural subjects, alternating between the 2 Village Halls of Hale and Woodgreen; usually during February, March and April in the early part of the gardening year, and resuming in September and October. A Plant Sale is held in April where plants can be purchased at very reasonable prices from both professional growers and where kindly donated by the membership. The Annual Show is held in July where members and non-members alike can enter a wide range of competition classes; flowers, vegetables, home produce and so on. Every 2 years Members open their gardens for public viewing, in May for Hale and June in Woodgreen. The combined AGM and Social evening is held in December. During the year at least one coach trip to a well known garden or gardens is also arranged. Details of all the events are to be found in the annual events schedule provided to members, the Parish Magazine, websites, various notice boards, and Annual Show schedules.

The Society aims to provide a wide range of interesting and informative events, while at the same time raising significant funds for nominated charities and having a lot of fun. For details of how to become a member please click here. New members, experienced or novice gardeners, are most welcome.